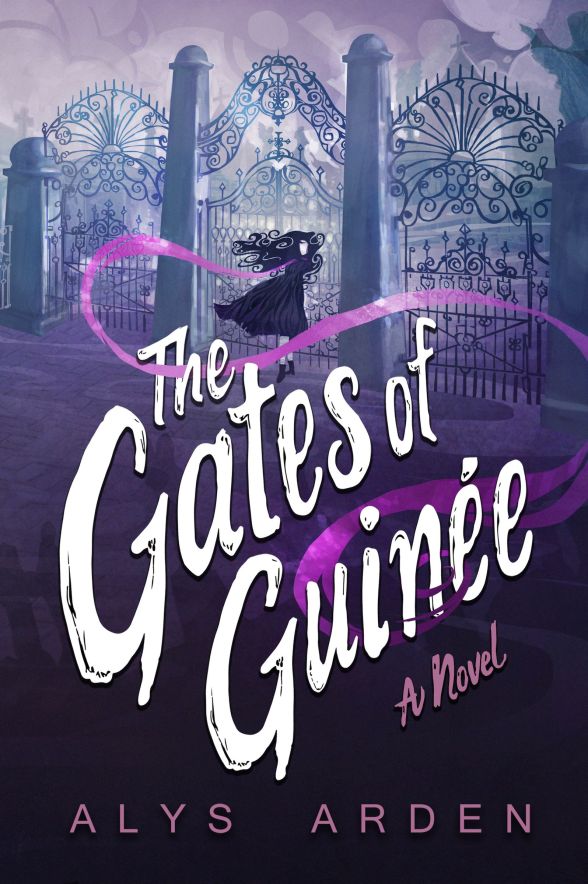 The Gates of Guinée

As the Ghost Drinkers seep into the crevices of the Crescent City, leeching the French Quarter of magic, the local witches are consumed with a new fight for survival. Adele has one chance to save everyone she loves, but it will mean breaking away from her coven and trusting a vampire.

For the first time in four hundred years, Niccolò Medici feels on the precipice of finding his stolen grimoire. But in order to restore his family’s legacy, he’ll have to succumb to his darkest desires.

New York transplant and first responder Isaac Thompson will stop at nothing to protect Adele, even if he has to give in to his Spektral magic to unearth the truth about Nicco’s monstrous past.

For those who choose to pass through the Gates of Guinée, the rules of the Afterworld are simple: Don’t eat the food. Tell no lies.

In a whirl of lucid dreams, fetish markets, and ancestral reunions, only those who bare their souls will survive this ghostly hunt, or else they’ll join the land of the dead permanently.

Teetering on the razor’s edge between everything she desires and utter madness, only her heart and her magic can lead Adele back home… if only Callisto Salazar hadn’t stolen her Fire, and the most secretive one of them all hadn’t stolen her heart. 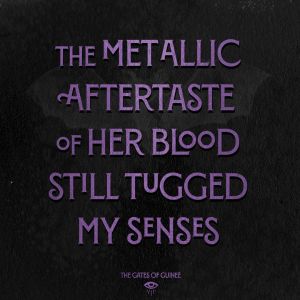 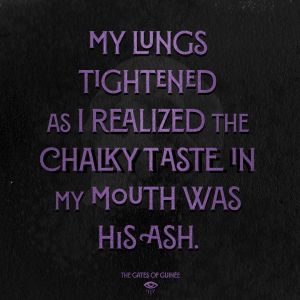 Pre-Order The Gates of Guinée Now!

Book 2 of The Weaver Trilogy

Most writers choose the endings to their stories . . . most writers are not Weavers.
Laney Holden is a freshman at Madison College whose life goes from normal to paranormal in a matter of seconds. When the antagonist in the book she’s writing shoves her down the stairs at the subway station, she learns she is a Weaver. Weavers bridge the narrow gap between fantasy and reality, bringing their words to life.

Laney soon meets William whom she also suspects is a character from her book—one she’s had a mad crush on since her pen hit the paper. But he’s in danger as her antagonist reveals a whole different ending planned for Laney’s book that involves killing William. Laney must use her writing to save the people closest to her by weaving the most difficult words she will ever write.

THE WEAVER is the first installment of The Weaver trilogy. It is an NA paranormal romance set in a small town on the north shore of Boston. It will leave you wanting more…

To celebrate the occasion, I’m thrilled to share my brand-new cover for Raimond…the prequel to Monsters & Angels.

Yes—prequel. Why am I writing books out of order? Let me explain.

After the successful release of Monsters, exactly 1 year ago, I
went straight to work writing the sequel. My readers demanded it.

OMG, it sounds surreal to say that, but they all wanted to know. . .

What happens to Sorcha?

What happens to Raimond?

And then I realized how much I didn’t know… and the incredible story I was
still driven to write.

This book is dedicated to

who knew Raimond was the true star of this show

long before I did.

Sometimes, in order to move forward, we all need to take a step back. 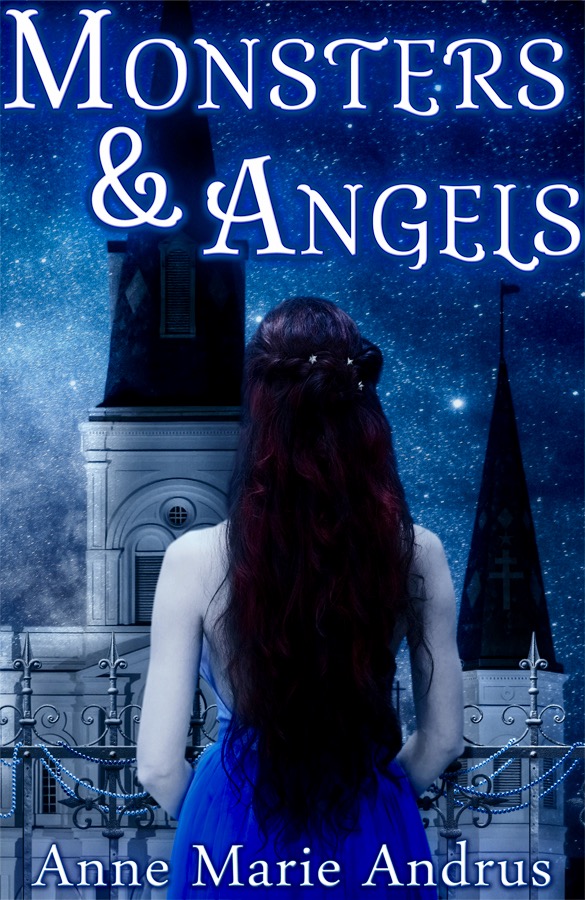 Finally! Time to show off the spectacular Monsters & Angels cover!

Special thanks to Magali Frechette at Storm Owl Art . She didn’t just design a cover, she wrangled my scattered visions and hit it out of the park!

Fledgling nurse Sorcha Alden knew she had the skills to save lives, but she never dreamed her own life would be the one in danger.

Driven by tragedy to honor her family name, Sorcha embarks on a journey that takes her from the bleak but familiar streets of New York, through the sultry and seductive city of New Orleans, and into the brutal jungles of Nepal. Forging friendships and carrying on her mother’s mission of healing was her dream. Plunging into a love affair with the mysterious Dr. Ashayle, could have been a fairytale.

Being murdered and waking up as a blood-thirsty monster—became her living nightmare.

Torn away from a life that had just begun, Sorcha returns to New Orleans as a newborn vampire, forced to start over in a cutthroat underworld of devilry and decadence. Complicated politics, bitter rivals and jealous ancestors stand between her and the promises she’s still determined to keep.

In a realm where the boundary between good and evil is as murky as the Mississippi River and immortal does not mean invincible, will Sorcha ever risk her shattered heart and love again? Can the magical harmony of the Crescent City give her enough courage to fulfill her eternal destiny?

Anne Marie has been an equestrienne, chorale singer, candy-striper, EMT, and baseball fan. Roaming the back roads of New Jersey with her family, she found great respect for antiques, historical locations and the stories they hold. Her current list of favorite pastimes include coffee, bourbon, and Les Misérables–which requires more bourbon. She has been known to attend sporting events just for the flyover. The boat she and her husband christened Glory Days, is her escape from the chaos of everyday life.

The inspiration for Anne Marie’s debut novel, Monsters & Angels, is her fascination with vampires and her passion for everything New Orleans. When she isn’t writing, she can be found working nights with the critical care team in a busy trauma center.

Over a hundred years after the death of Magnus Blackwell, Altmover Manor sits abandoned.
Lexie Arden and her fiancée, Will Bennet, are determined to rescue the neglected Mount Desert Island landmark. They want to make Altmover Manor their home. But Magnus has other plans.
A spirit bound to his former residence, Magnus finds himself inexplicably drawn to the young woman. She has a supernatural gift; a gift Magnus wants to exploit.
As Lexie and Will settle in, secrets from Magnus’s past begin to surface. Compelled to learn all she can about the former owner, Lexie becomes immersed in a world of voodoo, curses, and the whereabouts of a mysterious dragon cane.
Magnus’s crimes won’t be so easily forgotten, and what Lexie unearths is going to change the future … for everyone.

Lucas Astor is from New York, has resided in Central America and the Middle East, and traveled through Europe. He lives a very private, virtually reclusive lifestyle, preferring to spend time with a close-knit group of friends than be in the spotlight.

He is an author and poet with a penchant for telling stories that delve into the dark side of the human psyche. He likes to explore the evil that exists, not just in the world, but right next door behind a smiling face.

Photography, making wine, and helping endangered species are just some of his interests. Lucas is an expert archer and enjoys jazz, blues, and classical music.

One of his favorite quotes is:  “It’s better to be silent than be a fool.”  ~Harper Lee (To Kill a Mockingbird)

Alexandrea Weis is an advanced practice registered nurse who was born and raised in New Orleans. Having been brought up in the motion picture industry, she learned to tell stories from a different perspective and began writing at the age of eight. Infusing the rich tapestry of her hometown into her award-winning novels, she believes that creating vivid characters makes a story memorable. A permitted/certified wildlife rehabber with the Louisiana Wildlife and Fisheries, Weis rescues orphaned and injured wildlife. She lives with her husband and pets in New Orleans