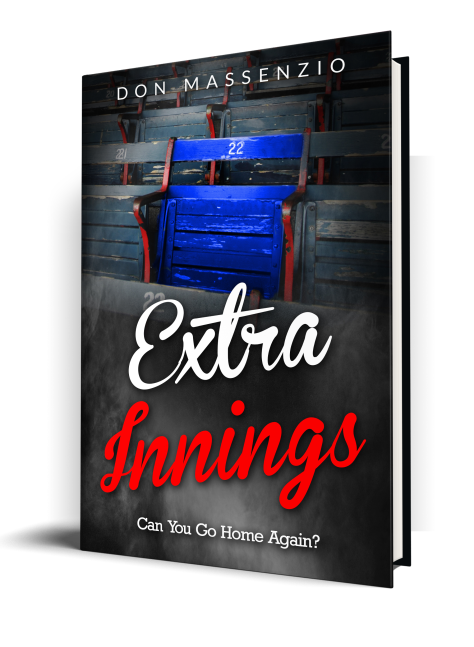 Ever since I was a kid in Upstate New York, the magic of going to a baseball game was something I’ll never forget. We had a AAA team in our town and they were the farm club of the New York Yankees. The post World War II stadium was small and quaint. It was also a bit rundown.

I remember opening days when snow had to be plowed from the tarp so the game could take place. I also remember humid summer nights where the mosquitoes were so dense, you had to brush them away from your face.

When I set out to write Extra Innings, I wanted to capture the feeling of that magic, but add another element to the story. What emerged is a story of a sad man, Joe McLean, who’s trying to capture some of his youthful memories as his beloved baseball stadium is being demolished to make way for a new one.

He buys a piece of memorabilia and receives more than he bargained for. He then sets off on a journey, using his newfound power, to change his life and undo some of the mistakes he made in his past.

The results are surprising.

Please enjoy Chapter 1 of my new book, Extra Innings. If you enjoy it, you can purchase a copy by clicking HERE.

Triple–A baseball is just one step below the majors. For Joe McLean and his family, being fans of the Langerton Chiefs was a legacy passed down through multiple generations.

Langerton is located in a no-man’s land part of Pennsylvania that forms a small barrier between Western New York and Eastern Ohio and butts up against Lake Erie.

Langerton’s sports scene consists of baseball during the all-too brief Spring, Summer, and Fall along with minor league hockey during the seemingly endless winter. Hockey was a great diversion in the winter, but it was baseball that added a special magic to the brief period of warm summer nights.

The Langerton Chiefs had a long history going back to the 1940s. The United States was hungry for normalcy after the horrors of World War II. The wholesomeness and pure sensibilities of the American spirit that baseball offered were just the cohesive forces the country needed to pull itself together.

The minor league system for baseball, with its A, AA, and AAA teams, gave fans an outlet for inexpensive entertainment that showcased talented players before their potential ascent to the Major League. Many of the stars of the AAA Chiefs went on to be well-known players. Also, players on the mend or those looking for a comeback, often made appearances in minor league parks to sharpen their skills with the farm team before, hopefully, heading back to their major league clubs.

The parent clubs of these teams tended to shift from time to time. Joe McLean remembered, with great fondness, the days when the Chiefs were a New York Yankees farm club. The Yanks would come to Langerton each year for an exhibition game. Joe and his brother, Mike, had stood in line for autographs from greats like Don Mattingly, Dave Winfield and other stars of the 80’s and 90’s. Joe’s dad had a baseball card for Thurman Munson that had the late, great catcher’s signature.

Now, as Joe passed into middle-age, the Langerton city council had voted to tear down the old Maxwell Stadium and replace it with one of those brand-new but old-fashioned venues that had become popular when the Baltimore Orioles built Oriole Park at Camden Yards in 1992. Joe was not happy with this development.

“I can’t believe they’re going to tear the old place down,” Joe said to his brother Mike as they downed a huge breakfast at the Little Star Diner.

“A dump? It’s the place where we saw some great players and some great games. How can you call it a dump?”

“Yeah. We did have some great times there back when the Yanks were our team instead of the Blue Jays. They’re not even an American team.”

“How many Americans make up a team these days, anyway?” Joe half-joked. “You’re right. Most American kids play soccer now. I don’t understand a game where, after three hours, there’s no score,” Mike said.

It was different though, the brothers agreed. A scoreless baseball game was a nerve-wracking event where, with each pitch, a million different outcomes were possible and strategic decisions could turn the momentum in a game. Both McLean brothers believed this to be true.

“I’m going to miss those old metal and wood seats. Something about that place made me feel at home,” Joe said.

“The new place will be fine. It’s the game that counts,

not where it’s played.”

“I know, but still, the ambiance is going to be missed.”

“Ambiance? Look at you Mr. Fancy College Boy. If you miss it so much, why don’t you go grab some pieces of the stadium and put them in your apartment?”

Mike was the older brother by eight years. He was approaching fifty, but looked older. He had a husky build with a strong upper body balanced out by a substantial beer gut. His grey curly hair topped a roundish head with an Irishman’s ruddy complexion. He was taller and wider than his younger brother, but they had the same piercing blue eyes inherited from their mother. Mike went to work in the local auto plant right out high-school. Joe had gone to college and was now a CPA.

“I don’t like that look, little brother. I was joking, but your face says you didn’t get the joke.”

“Well, what are they going to do with the seats and the signs?”

“Trash them. After they salvage what they want, they’ll come in with dozers and backhoes and tear the place down, load it in dump trucks, and haul it away.”

“So what’s the harm in taking a seat or some signs if they’re going to just dump them?”

“There’s no harm if you don’t mind the breaking and entering or the theft charges that go along with your plan.”

“Listen to you. You always had a drawer full of candy bars and cigarettes in our room when we were kids. Did you pay for those? Besides, I was going to ask if I could take something, or even buy it.”

“Hey, we were kids back then and, even though Mom and Dad dragged us to church every Sunday, I didn’t know any better.”

Joe smiled at his brother’s comment. He remembered those Sundays when Father McDougal would give a homily filled with parables about the evils of money and material goods. This was always followed by the passing of the basket so that the church could collect some of that evil money.

“I’ll call the team office and see who I need to talk to. You never know, they might just let me take some stuff,” Joe said.

“Well good luck with that. I’ll be looking forward to those padded box seats in the new Price Choice Stadium.”

The stadium was to be named for a grocery store chain owned by Lackawanna Specialty Services, a holding company with rumored ties to the mob in Western New York. LSS owned the land that the stadium was on and

decided to name the stadium after its discount grocery store chain and obliterate Maxwell name that the stadium carried for nearly 70 years honoring a World War II hero from the area.

“I’ll be there too, but I sure will miss old Maxwell with its leaky roof and smoky field.”

The concession stands that sold burgers, hot dogs, and other grilled items were close to the field at the third base side. When the wind swirled off of Lake Erie, it often took the smoke from the old-fashioned grills and covered the field in a thick, wonderful smelling, carcinogenic haze.

The brothers finished their breakfast and went their separate ways. Mike, to one of the few remaining auto parts manufacturers in the northeast, and Joe, to the accounting firm of Romano, Provenza and Bianchi. The brothers got together for breakfast every Tuesday morning and had done so every week of their adult lives barring sickness, vacation and holidays. The Little Star, a 55 year-old greasy spoon was always their destination.

Joe pulled into his firm’s parking lot. The building that housed R, P, & B was a circa 1960 cinder block box with plate glass windows. Joe had worked here for 20 years. He was a hard worker and would have made partner in any other firm by now. Nepotism and the lack of an Italian last

name, however, kept that from happening in this firm. He was content. He lacked the drive and the nerve to strike out on his own. R, P,& B was the only accounting firm in town and virtually every business and many individuals in Langerton made up their client base. Joe walked past the offices along the wall to his half-walled cubicle.

It was Johnny Provenza III, one of the new junior partners that was just one year out of college and the son of one of the partners.

“How about those Steelers last night?”

“I missed it. The Yankees were playing the Red Sox in the ALCS last night.”

“Baseball. What a snooze fest. Does anybody watch that anymore?”

“I still do,” Joe said feeling his age more than ever.

“Oh yeah, of course. By the way Joe, do you have the Healthway numbers for me yet? Dad’s been asking for them.”

“I’m just checking some last minute figures and should have it to you by the end of today.”

John noticed others in the firm beginning to watch the exchange between him and Joe.

“See that you do, Joe. I won’t tolerate missing a deadline,” the young Provenza said in a voice that had doubled in volume.

Healthway was one of the accounts that Johnny had been handed when he joined the firm as a junior partner. It was a lucrative medium-sized account with minimal complexity, but was way above Johnny’s abilities. Joe had offered to help and found the account totally dumped on him. He was doing all the work and would receive none of the credit. He wondered if John Provenza II. knew the work was not being done by his son. Joe would never tell. He just did his job without passion day after day. He was content. His only passion these days was baseball.

Baseball was an obsession that led to Joe tracking every statistic of every player on the Langerton team as well as the Yankees. He went to every Chiefs home game and weekend away games when they were within a three hour drive. It the game was more than three hours away, he was at home glued to the radio with a baseball score book recording every pitch, swing, score and out. And now, they were tearing down old Maxwell Stadium. The place where so many of his memories were made. He needed to get a piece of those memories for himself before they hauled everything away, but how?

Joe put it out of his mind. He had the Healthway numbers to finish and he had to focus and set aside his childish notions. He didn’t think about it again until lunch time.