Interview With A Different Vampire…

Doctor Raimond Banitierre, thank you for joining us today. Might you tell us a little bit about your story?

I see you’ve done some impressive research! Yes, I held that title once…in a different lifetime. But, it’s much too formal for today.

Is there anything you would want changed if your Author asked you?

I wish Anne Marie wouldn’t tell people about all my slip-ups. I admit, I ripped people’s heads off and put them back on the wrong bodies…one time, in a moment of regrettable revenge. I may have been born in the 1700’s, but even I’ve heard of accident forgiveness.

How would you describe Anne Marie?

Private, quietly emotional and passionate about the dignity of elderly people and their treasure trove of memories. We have that in common.

Most vampires don’t aspire to be doctors…there are much easier choices of profession. Anne Marie gives me credit for that sacrifice every chance she gets, though calling me a saint in spite of all my missteps may be…more than I deserve.

How about others in the story. Do you feel she did well with them?

Anne Marie portrayed my heiress Julia, and my children Lily and Steven perfectly…especially Steven. He’s like the son I never had, with talents far beyond what outsiders see.

If we’re being totally honest though, she needs to reveal my friend Prince Draven Norman as a more compassionate man, vampire…whatever. He may act like an arrogant and flawed jerk…often…but underneath all of that is an incredible soul.

Oh, and one more person—Ivori Journé has taken her knack for blending into the background and elevated it to an art form. The truth is, she’s a New Orleans voodoo starlet and powerhouse in the making. Never underestimate her. Never

You might be wondering why I’m wearing this scarf so tight. It’s not that I don’t trust you…

No worries, I’m on my best gentleman’s behavior today.

Okay, I feel better now. So, in the saga of Monsters & Angels, who created you?

The villain Faison, as a slave to bring him victims.

Are you still connected?

Was there a reason for your creation?

It was a trick and power grab. Faison wanted to rule Paris. It backfired on him, badly.

Where are you from initially?

I was born in the French Alps. I’ve since discovered that I’m descended from one of the few gladiators to earn Roman citizenship.

Were you happy or angry about the transition from human to bloodsuc—I mean vampire?

I was furious for decades. Finally, I fought back and won independence for myself and my family. But freedom is rarely free. It was a bitter lesson in reality.

I like to think I’ve made the most of my second chance at…existence.

AB-negative, but when I’m hungry, I’m not picky.

Favorite place to dine? Just in case some of us might want to avoid any late-night forays there in the future.

In New Orleans, the Rex Room at Antoine’s Restaurant. But please, don’t skip Antoine’s on my account…it’s a New Orleans must-visit. Especially if you enjoy Oysters Rockefeller.

Have you seen any more stories in the recesses of Anne Marie’s mind?

That girl has way too many stories in her head. A murder mystery at the Jersey Shore, a tale set in a mysterious Rhode Island mansion and a few more books in the Monsters & Angels Series.

Do you get to play a part in any of them?

I’ve never been to New Jersey…not yet anyway. But in Monsters & Angels, of course. I’m as much a part of New Orleans as the city is a part of me.

She shows a very tough exterior, downright icy and intimidating at times…that is, until you get to know her. Don’t get me wrong, Anne Marie is no wimp, but she’s much more sensitive that she reveals.

If she makes you mad, you could just bite her when she’s sleeping, you know.

What makes you think I haven’t? Besides, she may be a bit annoyed with me for spilling that particular secret. I’d better text her before this goes to print.

I’ve heard that you go all-out celebrating the holidays.

Christmas is my favorite season, but tonight’s festival is incredibly special too—the longest night of the year. You’re welcome to join our celebration of night’s glory. I’m sure Anne Marie would love to meet you. Who knows, you could be the inspiration for her next main character.

Thank you so much for your time, Doctor Raimond, and I think I’ll take you up on that offer! 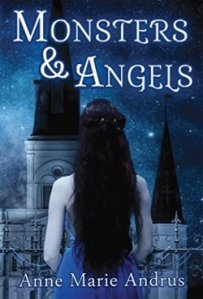 Read the original interview at JB’s Bookworms with Brandy Mulder! A special thank you to JB’s for inspiring these questions/answers and for participating in Raimond’s blog tour!