A wiry man crossed the avenue and limped under City Park’s arched gate to admire fresh holly wreaths. Gravel crunched under his pointy black boots. “This could be fun.” He raked one hand through the platinum streak at his temple and plucked a glittery ornament from the winding path. “Hard to believe so many rotten children don’t believe I exist.” Behind him, impending sunset glowed through tangled boughs and draped Spanish moss. “In exactly one week, their nightmares will come true.” He crushed the cardboard Papa Noël in his fist. “Yessss…positively jolly fun.”

“Halt, beast!” Cloaked in a flowing sapphire habit, the figure emerged from an ancient grove. She strode through the cathedral of sweeping oaks and blocked his progress. “Not in my city, sir.”

“And who’s going to stop me? You?” The man snickered and offered his bony hand in friendship. “I don’t think we’ve had the pleasure.”

“I’m Charmaine Roussel.” She flicked her gaze to his mock greeting and then locked her eyes with his. “I’m aware of what you are and you know bloody well I’m not alone.”

“Do I?” The man turned and doubled over with laughter. “So, your back-up appears to be a nurse who has clearly never held a pistol before and a crone waving her crooked stick. With all due respect, Mademoiselle Charmaine…” He struggled to compose himself. “You don’t stand a chance.”

“Shoot it.” Charmaine glanced at the trembling nurse. He might look like a normal man, but it’s a disguise. “Shoot now!”

The first bullet flew wide but the next two rounds blasted through the man’s ribs. He dropped to one knee as the swamp around them swallowed the sharp noise and spat back pulsating silence.

“Leave now and I’ll spare your life.” Charmaine gritted her teeth. “You’ve been banned from this city for a century.”

“Oh, the mighty New Orleans…how she has fallen.” The man shrugged a heavy cloak off his hunched shoulders. His fingers plunged into the wound, ripped out the bullet and tossed it into the underbrush. “Seven years of mourning and seven years of weakness after an incompetent fool killed your Duke. Once a coward, always a—”

The elderly woman wailed, stood straight and wielded her cane like a sword, blasting a ball of blue fire that ripped the man from the ground. He slammed back down in a smoldering fractured heap.

Charmaine crossed her arms with precision. “You were saying?”

The groan that escaped his twitching lips descended into a growl as black hair twisted into horns. For a few seconds, the misshapen head of an animal loomed in blue-grey smoke. “Savior of the soldiers, defender of the innocent, care-giver to the hopeless…” A human face fought back while the figure staggered. His eyes glowed a crimson hue only found in the deepest embers of the devil’s fireplace. “I think your Duke was a fraud.”

“Demon!” The nurse tossed her gun aside and grabbed the old woman’s cane, waving it at the beast’s face as if stoking the flames in his skull. “Show yourself!”

Invisible ripples of power exploded through the emerald canopy while the sky beyond plummeted into deep purple. At the moment of sunset, a vampire with tasseled gloves stepped from behind a massive tree trunk and fired her crossbow. A solid gold bolt lodged in the man’s neck. His body twisted and swelled until the fabric of his clothes ripped free revealing the coarse fur of a demented goat. He pawed one cloven hoof and bared warped fangs before lunging at his attackers.

Charmaine took two steps, reached under her habit and drove a swirled blade into the beast’s heart with her final stride. Time flickered and the ground thundered as the creature collapsed to the muddy pebbles, swirling his split viper’s tongue around her ankles.

Four women—a nun, a nurse, a witch and a vampire—stood over the writhing body. In unison, they grabbed the blade’s carved hilt and twisted until the demon disintegrated.

If you enjoyed this Holiday Lagniappe from the Monsters & Angels Realm, catch up on the saga... 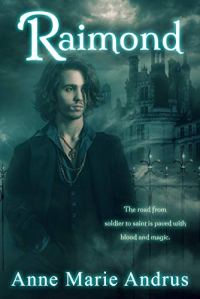 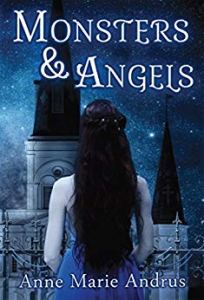